A drug policy reformer on why the revived debate about marijuana falls short. By gabriel sayegh

The frantic call came early in the afternoon, one day: “Can I come to your office?” It was Gale from Park Slope; she’d just been arrested for possession of marijuana. She was angry, confused, incredulous. She found our group online and wanted to talk.

I work at the Drug Policy Alliance, an organization committed to ending the war on drugs and advancing more sensible approaches to drug policy. When Gale arrived at our Manhattan office, she explained that she was a mother, a loving partner to her husband, and an accomplished artist and digital media producer. She was, she said, a “regular person” who enjoyed using marijuana recreationally every now and then.

She described a scenario that’s all too familiar in New York City: she was waiting to get into a local music venue, digging around in her purse, when plainclothes police officers surrounded her and asked her what she was doing. An officer told her everything would be fine if she just cooperated and told them if she had anything illegal. So she handed over her bag and told them it had a little marijuana in it. (Like many New Yorkers, Gale did not know what the law says about our Constitutional rights; had she, she might not have turned over her bag.) The police handcuffed her, transported her to the station, took her fingerprints and a mugshot, sent this information to the state arrest database, and kept her handcuffed to a chair for hours before releasing her with a desk appearance ticket and a later court date. Gale could hardly believe this kind of thing could happen in New York City. But the only thing that made Gale’s arrest even remotely unusual was that she is a middle-aged, middle-class white woman — not the typical target of NYPD profiling. 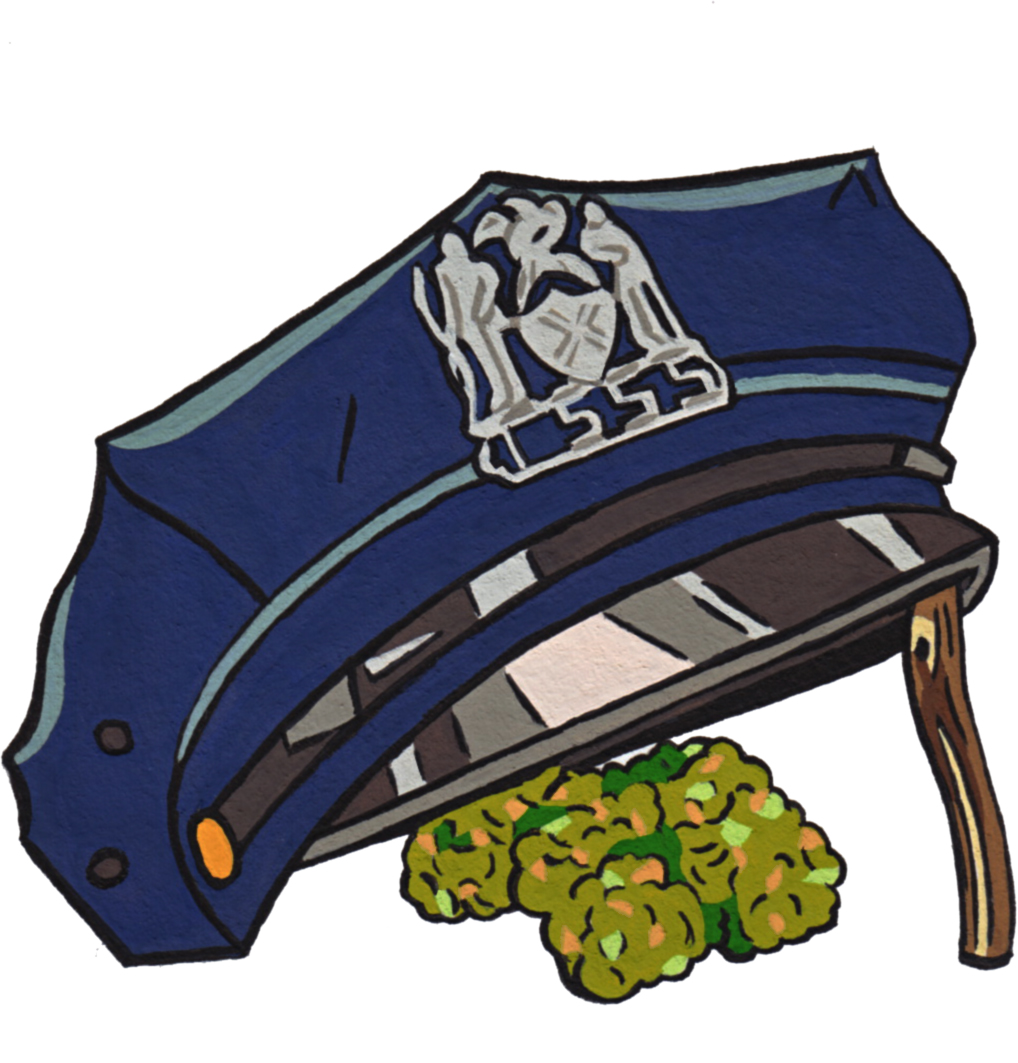 While the volume of arrests in New York is itself mind-boggling, the state’s marijuana laws are now infamous because of the racist nature of their enforcement. The data on marijuana use illustrate that young white people use marijuana at higher rates than young black or Latino people. Yet more than 85 percent of the people arrested for marijuana possession in NYC are black and Latino, mostly young men. In a feature story, WNYC mapped where most of these arrests take place. Not surprisingly, Bed-Stuy and Brownsville have far more arrests than the Upper East Side or Tottenville. As noted in the recent report by the state attorney general, the same young men profiled for stop-and-frisks are subsequently subjected to illegal searches and arrests for marijuana possession. In Brooklyn, black men are nine times more likely to be arrested for marijuana than are whites, according to the ACLU. New York Times columnist Charles Blow argues that the relentless targeting of communities of color by the police is one reason why the many black families are leaving NYC for the South.

It’s been more than 40 years since former President Richard Nixon declared a national war on drugs. Today, the U.S. incarcerates more people than any other country on earth, and over a million people are arrested every year on minor drug charges. After years of organizing and advocacy for reform, the nation is waking up to the failure of this war and, in some places, moving towards more sensible drug laws. Voters in Colorado and Washington state ended marijuana prohibition altogether. Twenty states and Washington, D.C. now have medical marijuana laws. A majority of Americans now support full legalization. And Congress is even discussing reforming mandatory minimum prison sentences.

There’s a rapidly growing national debate about the general failures of the drug war, and the nation’s broken marijuana laws in particular, with an increasing number of national figures — including Texas Gov. Rick Perry and U.S. Senate Majority Leader Harry Reid — acknowledging the need for reform. President Barack Obama touched on the disparity issue a few weeks ago in an interview with The New Yorker, when he talked about marijuana policies and said that society should not “have a situation in which a large portion of people have at one time or another broken the law and only a select few get punished.”

While many states are moving ahead with reform, progress is slow in New York, where a variety of marijuana-related measures are under consideration in the state legislature. Last year, lawmakers introduced a bill for full legalization, which has not yet gained traction. Two other marijuana-related bills — the medical marijuana bill known as the Compassionate Care Act, and a separate bill to address the marijuana arrest issue — have broad support, including support from Gov. Andrew Cuomo and many New Yorkers. But both have thus far stalled in the state senate.

The lack of progress in Albany means localities like New York City must do what reform they can on their own. Mayor Bill de Blasio recently told both radio station Hot 97 and Jon Stewart that the marijuana arrests need to end, and NYPD Commissioner Bill Bratton has expressed support for drug law reform: both good signs. And in the recent election for Brooklyn district attorney, candidate Ken Thompson promised to end prosecution of marijuana possession arrests and reiterated his commitment following his election. Long before she became speaker, City Council member Melissa Mark-Viverito championed reform to the marijuana arrest practices in NYC.

Stopping these arrests is a good start, certainly the right thing to do — and advocates must keep pressuring these officials to follow through. But it’s not enough. Something must be done about the devastating consequences and legacy of these arrests.

Harry Levine, a Queens College professor and a leading expert on marijuana arrests, has extensively researched what he calls “the most important and least recognized harmful consequence of arrests for marijuana and other minor offenses”: the criminal record. He writes:

Employers, landlords, credit agencies, licensing boards for nurses and beauticians, schools, and banks now routinely search these databases for background checks on applicants. A simple arrest for marijuana possession can show up on criminal databases as “a drug arrest” without specifying the substance, the charge, or even if the person was convicted. Employers and landlords, faced with an abundance of applicants, often eliminate those with criminal arrest records, especially for drugs. Nurses, security guards, and others licensed by the state can lose their licenses and their jobs from just one misdemeanor marijuana arrest. For legal immigrants, two guilty pleas to misdemeanor marijuana possession can lead to deportation, and one guilty plea can bar someone from ever returning to the U.S.

Anyone doubtful about how serious these consequences really are should read about how Penelope Harris lost custody of her child, or how Alberto Willmore lost his job.

To achieve greater equity and justice, district attorneys in New York City should hold police accountable for making false arrests and create a way for people arrested for marijuana possession to expunge their records. Back in 2011, we made a conservative estimate about the cost to taxpayers of these arrests: at least $75 million a year and over $600 million in the last decade. Another report, which we released last year, documents the astonishing number of hours the NYPD spent arresting and processing hundreds of thousands of people for low-level misdemeanor marijuana possession arrests during former Mayor Michael Bloomberg’s tenure. The report found that NYPD used approximately 1,000,000 hours of police officer time to make 440,000 marijuana possession arrests over eleven years. If the city stops making these arrests, there will be more than enough money and manpower available to create the programs necessary to right the wrongs associated with these racist practices.

As the nation is moving forward with reform, New York cannot continue the status quo, enforcing the same law differently for different populations where the dividing line is race, class, or geography. Given the total dysfunction in Congress and in the New York state legislature, where reform has thus far stalled, reform at the city level is the next best hope.

gabriel sayegh is the New York state director at the Drug Policy Alliance. He lives in Brooklyn.

Madeline Joyce is a freelance illustrator and a studio assistant to Brooklyn-based artist Duke Riley. Originally from New Jersey, she now lives in Sunset Park.

Bed-Stuy, East New York, Brownsville, and Bushwick collide beneath the multilevel edifice of concrete and steel, where the A, C, J, Z, and L trains intersect. Photos by Will DeNatale

The Lesson of Starrett City

At the edge of East New York, a model of affordable housing endures. By Oksana Mironova