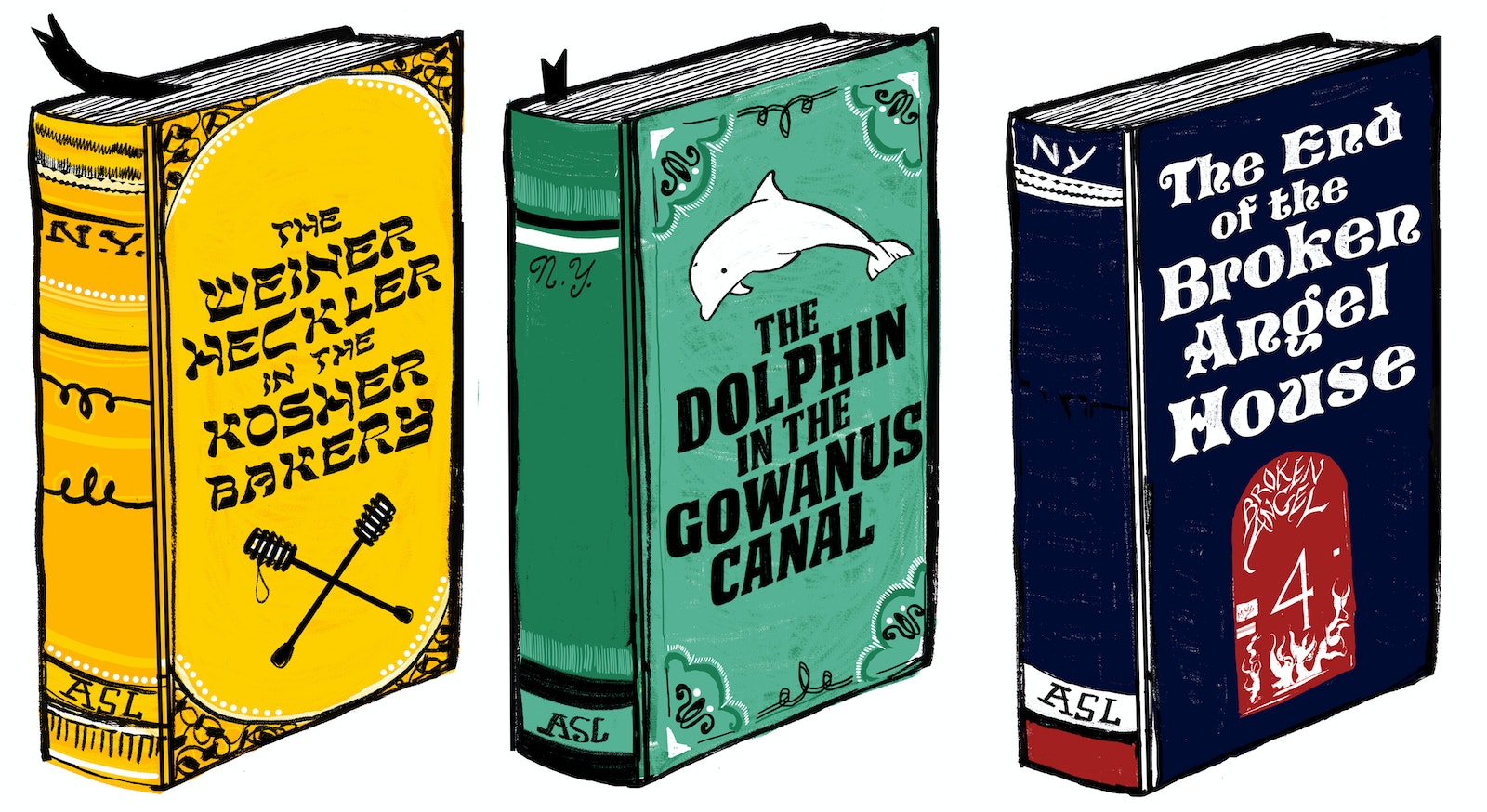 A Year in Ministories

Revisiting three Brooklyn moments that caught our eye in 2013.
By Molly Socha
Illustrations by Amanda Lanzone

A Year in Ministories

Revisiting three Brooklyn moments that caught our eye in 2013.
By Molly Socha
Illustrations by Amanda Lanzone

It seems like every other minute, a new event in Brooklyn attracts a flurry of white media vans and holds the Twitter zeitgeist for at least a few full hours. But what happens when the news teams pack up and Twitter moves on? In light of the new year, we decided to revisit three of 2013’s more memorable moments in the borough and check in on the major players.

The Weiner Heckler in the Kosher Bakery

Early in the mayoral race, shortly following revelations about his sexting alter ego Carlos Danger, Anthony Weiner made a Rosh Hashanah campaign stop at Weiss Homemade Kosher Bakery in Borough Park. Weiner’s presence ticked off another customer, who called Weiner a “scumbag” and told him to “think about his wife.” Rather than play the typical politician and ignore the heckler, Weiner engaged, telling the customer that he was not his judge, and that the sexting ordeal was a matter between Weiner, his wife, and his God. Cell phone videos of the exchange soon made it to Twitter and news sites. It didn’t take long for Weiner’s camp to release their own recording of the incident, which caught the heckler adding “married to an Arab” to his list of issues with Weiner.

We all know how Anthony Weiner’s campaign story ends, but how about the bakery? Steisy Lopez, a Bay Ridge resident, had been working at the bakery for a month when Weiner stopped by. She can be spotted in some of the footage, filming the confrontation on her phone from behind a case filled with various cakes and desserts. She had been waiting on the heckler before he began shouting at Weiner. “This place has always been busy,” Lopez says. “The only thing that’s changed is that they ask about Anthony Weiner.” Some of these customers will even ask her to send them the video of the battle that she recorded on her phone.

According to Lopez and the bakery’s owner Abraham Weiss, it’s the bakery’s unique Hanukkah donuts and special low-carb, high-fiber bread recipes that have kept business steady — not the Weiner spat.

The Dolphin in the Gowanus

Crowds of locals and news crews gathered on the Union Street Bridge over the Gowanus Canal in January, when an adult common dolphin made its way into the canal and struggled for several hours until its last breath. Helicopters circled overhead like vultures waiting for the inevitable as the Riverhead Foundation for Marine Research and Preservation — a nonprofit organization that rescues marine mammals and sea turtles in New York State — waited out the day until high tide to try to save the dolphin. The animal died during the waiting period, as judging eyes watched in horror. A necropsy revealed that the dolphin had suffered from severe kidney disease, and would have been euthanized if the Riverhead Foundation had rescued the animal from the canal. (Common dolphins normally travel in pods — when they discovered this dolphin was alone, Riverhead staff knew it was probably in trouble.)

Riverhead was following direct orders from the government organization that oversees it, the National Oceanic and Atmospheric Administration. Despite that fact, Riverhead received large quantities of hate email (approximately 25 to 30 emails a day to each member of the organization mentioned in the news for a few days following the incident) and a tarnished public image. “Every letter that is sent to us, we do try to respond,” says Kim Durham, the rescue program director for the Riverhead Foundation. “We’ve had to change a lot of what we do.”

The organization’s leaders have started blocking users from the foundation’s Facebook page. “I don’t like being called a dolphin killer,” Durham says. She said that if the dolphin had been stranded or washed ashore, the entire scene would have played out much differently, but in cases where a marine animal is still free swimming, Riverhead has to revert to government protocol and consult with the fisheries department of the NOAA. Though local aquariums voiced their support, Durham says she was disappointed by the lack of vocal support from the NOAA after the incident.

Since January, the Riverhead Foundation has hired a part-time media communications consultant who will assist in future events, and, Durham hopes, subdue public reactions and limit negative press. Over the summer, Riverhead rehabbed and released a Risso’s dolphin that was found stranded on a sandbar in an inlet of Fire Island.

The Last Days of the Broken Angel House

During one recent winter afternoon, the empty Broken Angel House in Clinton Hill felt like a last rebellious push against encroaching monotony in Clinton Hill. The artist Arthur Wood and his late wife, Cynthia, purchased the building in the 1970s, naming it “Broken Angel” and turning it into a living art project. The Woods added on several glass and wood structures to the building, including a large spire built several stories up from the top of the house. They also tore down all of the rooms to create one large open space inside. As a landmark within the neighborhood, the building also provided the backdrop for the film Dave Chappelle’s Block Party, filmed in 2004.

The Broken Angel House in 2006. Photo courtesy of Christopher Wood.

City authorities have been trying to modify or shut down the house for almost a decade, a battle widely documented in local press. But Cynthia and Arthur held tightly to their DIY project in architecture. Cynthia died in 2010, and Arthur remained in the house until May of this year, when he was finally evicted after the building’s foreclosure. A note dated May 22, 2013 remains in a wood-framed case to the right of the front door. In the note, Wood thanks those who supported him in his efforts to keep the building. He tells readers to keep hope.

As Yogy said, “It aint over till it’s over!”
Sincerely, Arthur
I’ll be back —

Before the eviction, Arthur and friends held their own party to celebrate the influence of the building and Arthur within the community. The enormous steeple that once defiantly stabbed the sky is no longer there. Now, icicles hang from the arched, brick doorframe and burlap covers openings on either side of the door.

While filing legal documents to get Broken Angel back from Madison Realty Capital, Wood rented out an art gallery in Beacon for a year. Currently, Wood is living with his son, Christopher, in Beacon, hosting shows of his own work and the work of his family and friends in the art gallery. Arthur has been working with filmmaker Tyler Chase for the last four years to create a film about his attempt to save Broken Angel, called A Castle in Brooklyn, King Arthur.

Losing Broken Angel wasn’t the only thing that angered and inspired Wood this past year. When news broke that Cooper Union would begin collecting tuition from its students for the first time, Wood tried to sell one of his paintings on Facebook for $650 million with the proposal to use the money to fund “the only free online college in America.”

Wood speculates there are plans to renovate Broken Angel and convert it into an apartment building. According to him, if he wins the appeal regarding the ownership of his house, he will own the building whether it’s been renovated or not. “When it’s been renovated, hopefully it should be completely occupied to people who pay $400,000 or more for their apartment. I want to knock on their door and say ‘Please get out of my building,’ and they’re going to have to leave,” Wood says excitedly. “It hasn’t happened yet, but it’s going to.”

Molly Socha is a freelance journalist. Her work has been featured on New York Public Radio, Bedford + Bowery, and The Local East Village. She lives in New York.

Amanda Lanzone is an illustrator based in New York City.

Lords of the Flea

Eric Demby and Jonathan Butler, whose knickknack and food markets have taken Brooklyn by storm, are just getting started. By Laura Entis

The legend of Brooklyn’s winter wonderland. By Benjamin Sutton, with photos by Will Ellis